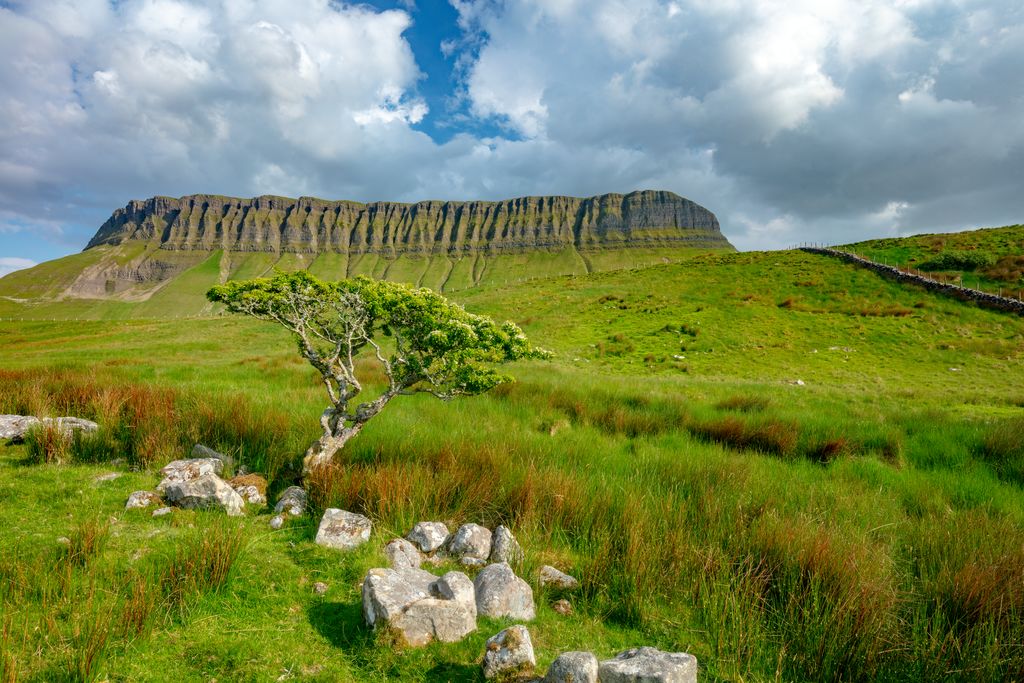 Hidden away just north of county Mayo is the charming county of Sligo, a place rich with history, culture and breath-taking sights. We were contacted by the McDonnells from New York to plan a trip for the day while they were exploring the Wild Atlantic Way. We picked them up from their hotel in Sligo town and set off with a jam packed itinerary in mind for them.

Sligo is a mountainous county so we made sure to navigate a route that took in the majesty of Benbulben Mountain along the way. It has such a distinct shape, it is often referred to as Ireland’s answer to Table Mountain. Formed when glaciers melted centuries ago, it is home to some alpine tree species seen nowhere else in the country. Our visitors were definitely the outdoorsy type so we decided to head straight to Glencar Waterfall for a wander around. This waterfall is one of the most popular to visit in Ireland and definitely one of our favourites. Also known as the Devil’s Chimney, there’s a lovely walkway through the woodland around the waterfall to enjoy. Best of all there’s a tea room where you can enjoy a relaxing brew overlooking the Glencar Lough after your walk. Bill and Joanne were travelling with their daughter Tiffany who really loved the playground located just next to the Tea Rooms!

Onwards, we wanted to show our guests some of the local history of the area too. We stopped off in the quiet Drumcliffe cemetery to show them where the famous Irish writer William Butler-Yeats was laid to rest. It’s located in a peaceful area next to a small church. His grandfather John Butler-Yeats served as rector there for 35 years. We told them about some of the poet’s work, much of it inspired by the local surroundings. We couldn’t visit Drumcliffe and talk about WB Yeats without a visit to the beautiful Lissadell House. This was home to one of the most historic female figures in Irish history, Countess Constance Markievicz, where she grew up with her family, the Gore-Booths. She was a pivotal figure in the 1916 Easter Rising during the War of Independence and the first woman elected to Irish Government. William Butler-Yeats and his brother Jack were friendly with Constance, her sister Eva and their brother Josslyn. The latter created a successful horticulture estate on the farm even developing a daffodil bulb farm of 237 different flowers. The estate sadly went into ruin but was restored by the Cassidy family who currently reside there. Today, you can visit the stunning Alpine and Kitchen Gardens with their intricate rockeries and gorgeous flowerbeds overlooking the bay. Given the rich history of the estate, there are also exhibitions about the historic figures of the house and the wartime history the house bore witness to. It’s a real hidden gem in this beautiful corner of the country.

We still had a little daylight left so we went as far as the breathtaking Rosses Point before we left our guests. Tiffany had a great time running through the surf while we strolled along the beach. We pointed out Coney Island to Bill and Joanne, the largest of the three islands around the Coolera peninsula. We told them how this was the original Coney Island which gave its name to the one they’d be more familiar with back home. The name Coney Island comes from the Irish term for Island of Rabbits. The captain of a ship named Arethusa travelled from Sligo to New York and observed all the rabbits on the New York island. The story goes that he named the island Coney Island after the one back in Sligo! The island is actually accessible by land when the tide is low and they promised us they’d be back to explore it when they returned.

We delivered our guests back to their hotel in Sligo town after our relaxing walk and they were delighted they had taken in a day of such history and culture as well as the sightseeing. We were thrilled they had enjoyed our stories and recommendations; it’s one of our favourite parts of the job.If you’re thinking of taking on the Wild Atlantic Way, don’t overlook Sligo as a destination, there’s a lot to see in this picturesque corner of the country!

Contact us for a tailor made tour taking in all of the beauty this side of the country has to offer.