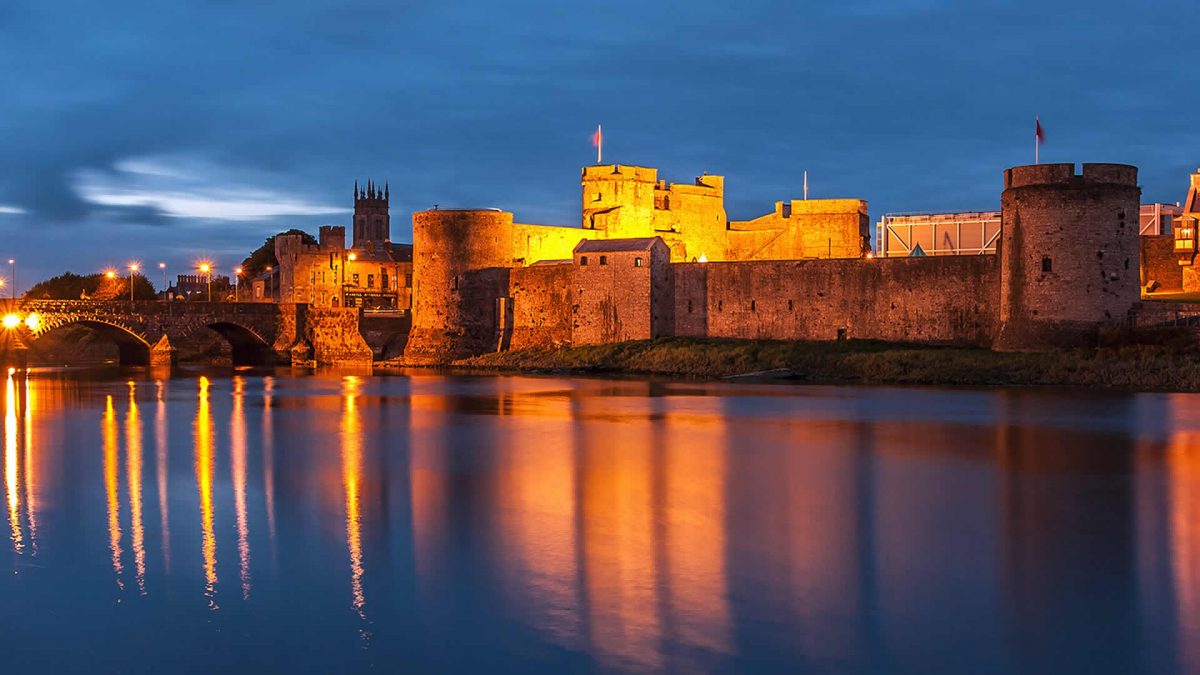 Squeezing two of Ireland’s most famous and well-preserved castles into one day sound impossible? Not to us! Let Laura and Tom whisk you on a private driving tour along the Wild Atlantic Way and see the legendary Bunratty Castle and King John’s Castle on one day trip to the west of Ireland.

Our driver will pick you up in the morning bright and early and take you first to Bunratty Castle in County Clare. Immerse yourself in the history, preserved so impressively in the walls of the 15th-century castle. Take one of the guided tours to learn more about how this castle changed hands numerous times down through its interesting history. The folk park on the grounds of the castle is also well worth a look while you’re there. Keep an eye out for the resident Irish wolfhounds, Meabh and Saoirse. As you stroll down the village street, you’ll get a glimpse into times gone by with authentically restored storefronts and farmhouses recreated to represent a bustling 19th-century rural village.

Our top tip while in Bunratty – Durty Nelly’s! Don’t let the name throw you, this place has been part of the landscape of Bunratty now for nearly 400 years. Stop in for a bite of lunch, either in a cozy snug or out front on the terrace. An ideal spot for pictures with its bright facade and views over the river Shannon.

After your lunch, your driver will take you 20 minutes down the road to Limerick city. An often overlooked gem in the west, Limerick is known for its warm welcome and friendliness. The next stop on your trip is King John’s Castle, located on King’s Island in the heart of the city. Built in the 13th-century, it’s slightly older than Bunratty but with the same amount of charm! Recently restored with some new interactive experiences for visitors, it’s a great place to learn more about Irish history and our Norman roots. The castle has a tumultuous past, it saw an incredible five sieges in Limerick during its lifespan. Climb to the very top for some breathtaking views across the city skyline and the river rapids below.

You’re only a stone’s throw from one of the locals’ favourite watering holes at the Curragower once you’ve left King John’s. Cross the bridge over the Shannon and you’ll see the pub right on the riverside. Famous for their award-winning food (including one of the best seafood chowders), it’s the perfect place to relax while you mull over the history and sights you experienced during the day. If you manage to get a seat in the risen outdoor terrace, you’ll get some fantastic views over the Curragower Falls in the river, for which the pub is named.

So if you want a crash course in all things medieval Ireland, we’ll be more than happy to assist! Contact Tom or Laura from VIP Chauffeur today and let’s get started on planning your perfect, tailor-made trip around Ireland.